The Lod mosaic in Paris

I visited the Lod mosaic in Paris in 2013.This particularly well-preserved mosaic, dated 300 AD, was discovered in 1996 in Lod near Tel Aviv. After extensive repairs and documentation, the mosaic was reburied to prepare well for the re-excavation and conservation of the mosaic in September 2009 (13 years later). This mosaic is all together 15 m x 8 m.

As I said, this mosaic is of exceptional quality, not only is it very well preserved, it must also have been made by a very talented mosaic artist and funded by a very wealthy person. This mosaic immediately attracted a great deal of scientific interest, firstly due to the absence of the human figure and secondly because of the 2 ships that are depicted in the 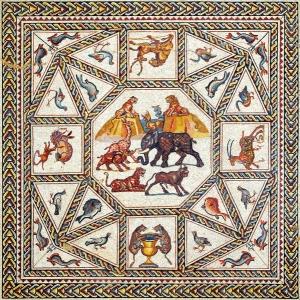 lower part of the mosaic. As a result, for example, it is completely impossible to determine whether the house was inhabited by a Christian or a Jew. Because of the scene in the middle with the wild animals in combination with the ships, it is suspected that the house belonged to a trader in exotic animals. Animals that were introduced to fight the gladiators. In the surrounding frames, however, we see cats that attack animals, which in turn suggests a natural environment. The mountain and the water feature of the center panel also suggest a natural environment. The water feature in combination with the 2 mountains on which the lions are sitting could refer to the Simien mountains in Ethiopia, so this can again be a reference to trade with other countries. The water can refer to the sea or even the Nile. The sea, because this place was on the coast and people lived off fishing. Around the middle part there are various triangles in which fish and birds are depicted. 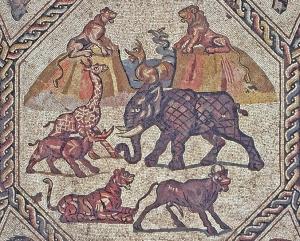 What else do we see on the center of the mosaic? Between the mountains we see a kétos, a mythical sea creature that could refer to Oceanus. A giraffe (depicted only once elsewhere on a mosaic – 5th century AD), a rhino with 2 horns (so the African species), an elephant, a tiger and an ‘Auroch’ is an extinct type of bull. The elephant’s skin is depicted in this typical way – with diamonds – to represent wrinkled skin.

The hunting animals depicted in the border around the octagon suggest a natural environment and the bloodshed is always displayed in the same way with blood streams and a line at the bottom that visualize blood loss.

There are also various references to riches in the mosaic such as this special vase with zoomorphic handles. A reference to the amphoras from that time. There are several golden vessels on this mosaic and, for example, a peacock which also refers to wealth.

The northern part of the mosaic has the same cable pattern as the main panel and exudes the same atmosphere. Hunting, feline fish, birds and a reference to fishing. 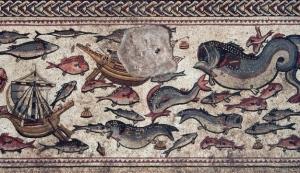 The Southern panel is a marine scene, in which the fish swim in a transparent sea. Two ships, one with bulging sails and one with the sails lowered. The large fish at the top right represents a whale with the same curly tail as the kétos. A dolphin is shown below on the left. Furthermore, various fish species can be recognized. We also see various shells.

2 footprints were also found in the layer under the mosaic, 1 bare foot and one with sandal. They also found the print of 4 fingers there. Colorants and lines were also found which shows that the mosaic was first fully drawn before it was laid. They also could see that new pieces were added every day. This is called ‘Giornata’ (from 1 day). 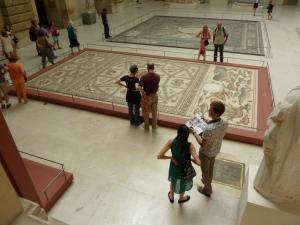 This is what the mosaic looked like in Louvre in 2013. This is how you get an idea of the format. The mosaic then traveled around the world and in the meantime people wanted to build a museum where the mosaic was found. However, new parts were found in 2016 and construction was delayed because of that.